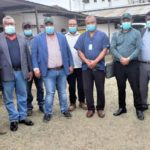 The Minister and his Departmental Head stopped over at the hospital on their way to Port Moresby from Kurumul in Jiwaka Province where they officially opened the new Jiwaka Provincial Health Authority building on Wednesday, 27th January.

The medical officers took Minister Wong and Secretary Liko to the Emergency Department and the Operating Theatre and briefed them on the operational issues faced by these facilities and other sections of the hospital before they left for Port Moresby.

The doctors also told them that plans for the redevelopment of Mt Hagen Hospital on a Public Private Partnership (PPP) arrangement were all ready and that as soon as the necessary funds were made available, work would begin on a new site close to the city.

There are at least two possible sites that have been identified, both state land, and as soon as negotiations with the current lease holders are complete and an agreement reached with one of them, work should begin.