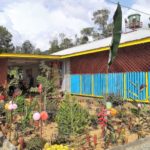 Doctor sets up clinic to help his people

Having a heart full of love, care and affection for his people has seen a medical officer from Jiwaka Province go out of his way to set up a family health centre to serve them.

Dr Malts Wai, a senior medical officer (SMO) in Obstetrics & Gynaecology at Mt Hagen Hospital has spent his own resources including his fortnightly wages over the last three years to set up the health centre to help not only his people but the whole of Jiwaka.

Dr Wai said he had set up the health centre to provide among other services, free reproductive health clinics for women throughout Jiwaka because most women in rural villages did not have access to such services.

He said it was also discovered that women did not feel comfortable going to the nearest Kudjip Nazarene Hospital because of some self-identified racial differences and coupled with high consultation fees and bus fares to Kudjip and Mt Hagen Hospitals to seek such services, it was a lot of burden on them.

Dr Wai said as a result of this, many women never sought professional advice on reproductive health and delivered in their villages, sometimes going through complications which resulted in the deaths of either the baby, mother or both and he wanted to do something to at least save their lives.

Dr Wai has spent in access of K150,000 which also includes a bank loan that he is currently repaying to complete the clinical building and purchase a scanning machine. The centre is manned by a fulltime nursing officer paid by himself, who provides other clinical cares as well as book reproductive cases for him to attend to on his free days.

The Western Highlands Provincial Health Authority has assisted Dr Wai with four in-patient beds to show its support for health services in Jiwaka and he hopes to seek further assistance from the Authority to provide further equipment that may be surplus to its needs such as a delivery bed and a number of IV fluid stands.

Dr Wai has also asked the Jiwaka Provincial Health Authority to provide drugs as well as a health extension officer, a nursing officer and a midwife for the centre and the Chairman of JPHA had publicly announced at the opening that these would be provided and if honoured, it would further enhance health service delivery in the province.

The Member for Maprik and Minister for Agriculture and Livestock, Hon. John Simon when officially opening the centre at Warala village near Banz on 29th December 2020 said he was happy for such a facility to be built in his late mother’s village and made a cash donation of K20,000 in her honour.

He said the money was not a donation from the Government but from his own pocket to his mother’s people so that they could receive better health services at their doorstep and live happy and healthy lives.

He added that such a health service was long overdue in the North Waghi District and urged the Jiwaka Provincial Government and the Member for North Waghi, Hon. Dr Fabian Pok to make available sufficient funds to purchase drugs and recruit the necessary staff.

A representative from the Office of the Member for North Waghi thanked and congratulated Dr Wai for spending his own money to set up such a vital service for the people of North Waghi and Jiwaka and pledged K50,000 as seed capital to assist with its operations.