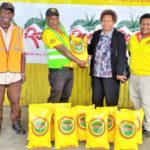 The company which donates rice to the hospital on a yearly basis this time has donated 10 bags of 10kg trukai rice.

A member of the Senior Management of the Western Highlands Provincial Health Authority took delivery of the bags of rice during a small ceremony at the company’s Mt Hagen rice terminal on 23rd December 2020.

Jacob Yawi, the company’s Area Sales Manager for Western Highlands, Southern Highlands and Enga said when presenting the bags of rice that the small gesture was to show the company’s appreciation for its major clients’ continued customership.

He said the WHPHA was one of its major clients and therefore the company felt obliged to give something back to show its appreciation.

He added that usually the company would donate one ton of rice to clients such as WHPHA and police in the region every end of the year but this time it could not meet the target because of the effect Covid-19 has had on its operations.

WHPHA’s Deputy Director Nursing (clinical), Sr Joan Okk when accepting the donation said rice was PNG’s favourite food and the PHA bought plenty of it every year so that its patients could be fed some good nutritious food.

She said the WHPHA greatly appreciated Trukai Rice Industries’ continued support over the years and she hoped this relationship would continue in the years to come for the benefit of the in-patients at Mt Hagen Hospital.