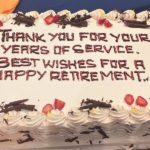 Twenty-six long-serving employees of the Western Highlands Provincial Health Authority (WHPHA) have retired after many years of service to the nation.

The retirees, aged between 55 and 75 years were officially farewelled by the WHPHA and the Department of Personnel Management during a gathering at the Highlander Hotel in Mt Hagen on Friday, 11th December 2020.

Three of the employees had passed away while waiting for this occasion while the remaining 23 were all present to receive their retirement certificates and final entitlements.

Those who retired – both male and female – included nurses, community health workers, drivers and cleaners who had sacrificed their lives and worked long hours with little pay to save lives.

Chief Executive Officer, Mr David Vorst when congratulating the retirees said the WHPHA had the best health indicators nationally and this was a direct result of the consistency and the tireless efforts and energy that these employees and others had put in over the years.

He said as a result of such efforts, the WHPHA was now spreading its clinical governance into the rural facilities to provide better health care to all those who sought its care.

Mr Vorst said on top of this, UNICEF has made available K3.8 million to immunise children between nine and 14 years of age over the next three years and the WHPHA was grateful for this as it would be the first to carry out this program in the Pacific region.

He also added that Tininga Group of Companies have incredibly continued to assist with immunisation programs over the years and their efforts were also very much appreciated.

He said with such assistance coupled with the dedication and tireless efforts of the hardworking staff, health services in the province have improved and he was very happy for everyone’s commitment.

To the retirees, he said it had been a long and hard road to get the Department of Personnel Management to make the money available for them and he urged them to use it wisely or invest it somewhere for the future benefit of themselves and their children.

The last time such a gathering was held was 15 years ago where a similar number and cadre of workers were paid their final entitlements and farewelled.