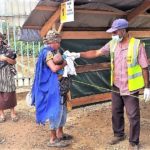 The increase in the number of Covid-19 positive cases in the National Capital District is a worrying concern for the country and all citizens must adhere to the safety guidelines of the virus and keep themselves safe.

The Western Highlands Provincial Health Authority is concerned that Western Highlanders would be worst affected due to the number of flights that arrive in Mt Hagen from Port Moresby every day with only very basic screening possible.

It is also concerned that the Highlands Highway is open to all traffic with no roadblocks at the provincial borders and is urging all citizens to take every precautionary measure when travelling such as adhering to the 2-meter social distancing practice and frequent and proper hand washing.

During an emergency meeting of the WHPHA Covid-19 Task Force this morning, it was decided that strict controls would be imposed at the main entrance to Mt Hagen Hospital and everyone entering the hospital would be screened. As a minimum to enter the hospital a person’s temperature will be checked and on the basis of that they will be further screened or allowed to come into the hospital. This applies to patients and visitors alike, a spokesman for the hospital said.

It further decided that all vehicles would be turned back at the front gate except for those belonging to staff with passes and those transporting critically-ill patients for the Emergency Department but all occupants would still need to be screened.

The main gate would be closed and only the small one would be open for people to enter which would also make it easy for temperature checks to be done on everyone entering the hospital premises.

Social distancing would also be maintained at the main gate, the car park, revenue section and the pharmacy and people would be encouraged to use the hand wash basin at the gate and wash their hands or use hand rub solution before entering the hospital premises.

Health Promotion teams would also be conducting awareness in the City as well as in the rural areas starting this week to further strengthen the messages previously delivered to ensure everyone understood the seriousness of the disease.