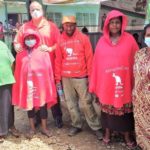 There was double celebration for 15 mothers who went for their normal antenatal clinic at the Susu Mamas Urban Clinic in Mt Hagen City on Friday, 7th August 2020.

The mothers not only attended the clinic and celebrated the National Breast-feeding Week but they were also given ponchos to take home and wear to protect their newborn babies from neonatal hypothermia.

The ponchos which have been jointly sponsored by UNICEF, Digicel, Tininga and Western Highlands Provincial Health Authority (WHPHA) were distributed to the 15 mothers and two fathers as part of the “Saving Lives, Spreading Smiles” (SLSS) program.

UNICEF piloted the SLSS program in the Tambul/Nebilyer District in 2018 as part of the Kangaroo Care initiative which focuses on preventing and managing bleeding after delivery, a common cause of death in mothers and neonatal hypothermia (low body temperature) in newborn babies.

About 600 ponchos with caps have been made and printed for distribution to expectant mothers in the Western Highlands and the 15 mothers and two fathers were the first to receive them.

Digicel PNG’s Regional General Manager for the Highlands, Julian Briggs and Leo Berka, a Member of the WHPHA Board of Governance were on hand to present the ponchos.

Mr Berka when addressing the gathering thanked UNICEF, Digicel and Tininga for their continued support, saying their involvement would ensure the success of this program.

He said the WHPHA and Susu Mamas who are driving this program would not be able to do it alone, adding that team work was the best way to see great results.

General Manager for Susu Mamas, Douglas Apeng said his organisation was small and depended largely on partners such as Digicel and Tininga for donations to carry out its services effectively.

WHPHA’s acting Director for Population Health, Fredah Pyanyo said the Kangaroo Care initiative was a very vital project to save children, especially newborn babies and the support given by UNICEF, Digicel and Tininga was very much appreciated.

She said the mortality rate for the Western Highlands had been high in the past but since the introduction of the SLSS program, this had dropped dramatically and expressed her gratitude to all those involved.