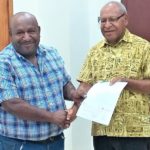 The last meeting of the Western Highlands Provincial COVID-19 Co-ordination Committee, chaired by the Chairman and Provincial Administrator, Mr Joseph Neng was held on Tuesday, 30th June, 2020 and discussed the following key issues.

The meeting was also an important one because representatives from the Australian Department of Foreign Affairs and Trade (DFAT) who will fund the upgrading of the market together with the people it has contracted to carry out the job were also present to brief the committee on what they would do.

The Australian Government is funding the upgrading of the market along with 13 others throughout the country as part of its assistance to PNG to recover from its Covid-19 lock down and state of emergency which has had a huge impact on its economy. This assistance is provided under an aid program called MERI – Markets, Economic Recovery and Inclusion.

PLANPAC, a consulting firm comprising project managers, architects, master planner, town planners and capacity development teams and UN Women will work together to redevelop the market so that it is Covid-19 compliant. The teams are already on the ground to do survey work and other plans this week in preparation for actual work to commence immediately.

Chairman of the Provincial Co-ordination Committee, Mr Joseph Neng said amidst the presence of Covid-19, the market issue was a very important one as the whole community depended on it to survive and welcomed the assistance by DFAT.

He said it was now nearly three months since the market was closed and efforts to have it refurbished and re-opened as quickly as possible had been hampered by shortage of funds.

He added that some repairs had been carried out but this was not enough to re-open the market, resulting in many smaller markets springing up everywhere in the city, creating an eye-sore and a health concern.

Mr Neng said Western Highlands was a very difficult province to manage in terms of Covid-19 because it was the centre of the Highlands with many people transiting through it from the neighbouring provinces, making it more vulnerable to Covid-19.

He said the economy of the Western Highlands was agriculture-based and people depended largely on this to meet all their financial requirements. He added that the market was very important for them to sell their produce and make money and were eager to see it re-open as soon as possible.

On this note he announced that the Member for Hagen Open and Minister for Commerce and Industry, Hon William Duma had made available K200,000 to the City Authority to contribute towards Covid-19 preparations in the province and the Deputy Lord Mayor, Hon Jacob Michael presented it to the Chairman, Mr Joseph Neng.

Mr Neng when thanking Minister Duma for the contribution said since the formation of the Provincial Covid-19 Committee in March, there had been no money available to work with but it was fortunate to receive support from donor agencies such as DFAT and the International Committee of the Red Cross and businesses like Tininga to kick-start the preparations.

He said along the way some donations had been received from the National and Provincial Governments as well as individuals and a private organisation and this had helped to expand its preparations at Mt Hagen Hospital.

He added that Western Highlands was central to all Highlands provinces and if a case was confirmed in Southern Highlands or Enga, it would also affect this province and Minister Duma’s contribution would greatly help to meet activities under the Provincial Covid-19 Response Plan.

The Committee decided that of the K200,000, K60,000 be given to the market, K40,000 each to WHPHA and police, K30,000 for the provincial emergency response plan, K20,000 to media and K10,000 for contingency plans. City Authority CEO, Leo Noki said he was pleased with the K60,000 allocation for the market as this was the kind of amount required to complete minor repairs to market facilities.

He added that Minister Duma had pledged a total of K400,000 and it was anticipated that the remaining amount would be made available at a later date to help the committee to further expand on its preparations.

WHPHA has also trained more than 780 health staff for Covid-19 responsibilities and with the completion of nearly all the infrastructure necessary to treat Covid-19 patients, the WHPHA is now fully prepared to take on the first case of Covid-19.

It has completed an isolation unit and a quarantine facility among other facilities and has also completed surveillance at Kagamuga Airport and some parts of the community as well as carrying out awareness within the province which has been quite successful.

The wider community is angry with the WHPHA, saying it has closed the market but this is not true. The closure is a collective decision of the committee to ensure its operations are in compliance with Covid-19 regulations and we must do whatever we can to have it re-opened as soon as possible for the good of the economy of the province and the country.

The upgrading of the clinic in the market is also necessary, especially for mothers and children and Susu Mamas are ready to take on the responsibility of managing it.

At Mt Hagen Hospital, 30 percent of children who come for treatment are from other neighbouring provinces and if a positive case comes from them, other children are vulnerable and treatment would not be easy to administer because there is complete lack of leadership at the national level to provide the necessary drugs, medical consumables and personal protective equipment on time. For example the first batch of swabs arrived only on Monday and all were oral swabs which the Institute of Medical Research says should not be used and some 46 cartridges for the GeneXpert machine received more than a month ago have all been used and we cannot get any more.

Vendors selling their market produce outside the main market area is getting too crowded every day and police are being posted there regularly to try and control the crowd.

Police will work closely with the market management and the City Authority to try and control the crowd at the market as well as the main bus stop to ensure the city is kept clean and tidy.

The peace process for Dei District has started with a cease fire agreement signed recently between leaders of the two warring clans, police and other tribal leaders as well as Governor Wingti and Members of Parliament from the province. A final agreement will be signed later to complete the peace process.

There being no other business, the meeting closed at 13.10pm. The next meeting will be held at 10am next Tuesday, 7th July 2020.