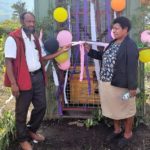 Thanks to the Brian Bell Foundation, Bukapena Health Centre in the Mul/Baiyer District of Western Highlands will now have electricity at its facilities.

The Foundation has assisted the Health Centre with a new 6.5KVA generator, part of a K350,000 financial assistance to the Western Highlands Provincial Health Authority (WHPHA) to pay for essential services, including the purchase of drugs and equipment.

The generator was officially launched at Bukapena Health Centre on Friday, 10th July 2020 by the Director for Nursing with the WHPHA, Sr Janet Yamu before a crowd of more than 100 people including nine ward councillors from the local area.

Ward Councillor, Harrison Kont when welcoming the guests said services at the Health Centre had improved greatly in the last five months since the arrival of new Officer-In-Charge, Sr Merolyn Koke.

He said as a result, the number of visits to the facility had more than doubled and asked if the number of staff could be increased to meet the demand.

Sr Yamu said the aim of the Provincial Health Authority was to improve services at the facility level so that people could seek treatment there instead of travelling to Mt Hagen Hospital which was already under-staffed.

She said when the community and the health workers co-operate and work together, services can improve and the people can benefit immensely from such relationship instead of travelling to Mt Hagen which was costly.

Sr Yamu said the PHA did not have enough manpower to send additional staff to the rural facilities and urged the people to look after the facilities and the staff well in order for them to receive much needed services.

Dr Joseph Kuk told the people that the Bukapena area was big enough for a district hospital to be built for the people in the Mul Local Level Government area to bring all clinical services close to the people but funding was a major obstacle.

He said the catchment population was big and warranted a district hospital but the WHPHA was not in a position to build it due to financial constraints and urged the people to talk to their politicians to source the necessary funds and build it.

Dr Kuk said once built and the WHPHA’s organisational structure approved by the Personnel Management Department, more staff including a health extension officer and a doctor could be based there to serve the local population.