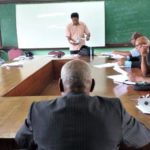 It said under its business plan worth about K14 million it had planned to carry out continuous awareness in all the districts of the province, buy personal protective equipment (PPEs), buy drugs and medical equipment, build quarantine and isolation units and a cough clinic, put up tents to test patients etc. but could not implement all of them because the plan had not been fully funded.

Schools need funds to set up hand washing basins and buy PPEs, Mt Hagen Market needs to be upgraded including having its toilets and fencing fixed, waste disposal managed well and water connected so that it is COVID-19 compliant before it can be re-opened but all this cannot be done.

The Western Highlands Provincial Health Authority is fortunate to have had the support of partners such as the International Committee of the Red Cross (ICRC) and Tininga Group of Companies who have helped to fund the setting up of the isolation unit and the quarantine centres respectively.

The WHPHA had only received a total of over K400,000 – K200,000 from the National Department of Health through the Health Service Improvement Program, K200,000 from the WH Provincial Government, K20,000 from the Member for Tambul/Nebilyer and K15,000 from an NGO, Lesfordlati Health Promoting Foundation Inc. and this has all been spent with more activities yet to be carried out.

The Members of Parliament from the Western Highlands including Governor, Rt Hon. Paias Wingti have made a total commitment of K1.5 million but four weeks after these commitments were made this money has still not hit the COVID-19 Provincial Trust Account.

Last week’s meeting was chaired by Mt Hagen Hospital Manager, Jane Holden in the absence of the Chairman and Provincial Administrator, Mr Joseph Neng who was continuing to follow up with the MPs and the District Development Authorities on their commitments.

The Committee unanimously agreed that there were many activities that needed to be carried out under its business plan but funding was a problem and the minutes of the meeting be posted on social media, especially Facebook and WH Development Forum so that the wider community could read it and may be help.

The Committee also expressed concern that the National Government had made available K600 million to carry out the State of Emergency and to make preparations for the onslaught of COVID-19 but nothing has been allocated to the WHP or the WHPHA in particular to conduct awareness and complete preparations to contain the virus.