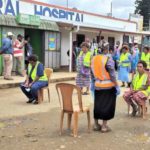 The Western Highlands Provincial Health Authority (WHPHA) is appealing to all ward councillors, village court magistrates and community leaders to play an active role in the dissemination of vital information on the corona virus pandemic in their respective communities.

The authority has conducted awareness and distributed posters throughout all the districts but there are some areas which are remote and others that are trouble spots such as Dei District which it has not visited and this is where leaders are required to assist.

The public must understand that corona virus has the potential to be a deadly disease which the authority is very concerned about and is doing everything it can to advise them about how it spreads and what they can do to avoid contracting it.

There have been instances where people, especially young men have harassed and intimidated health promotion officers while conducting awareness at roadside markets, bus stops and settlements in Mt Hagen City and this must stop.

Those who are doing this are very selfish and their actions clearly demonstrates their ignorance and lack of understanding and respect for the many innocent people who may be affected through no fault of their own.

Acting Chief Executive Officer for the WHPHA, Ms Jane Holden said she was aware that there are some concerns regarding allowances for Councillors but that is an issue for District and Provincial Governments. She thanked those who have taken a lead in spreading the message and asked others to put the welfare of their people at the forefront.

She said there were a lot of financial issues faced by the country with the health sector not getting its full share of the National Budget to help hospitals prepare well for the corona virus pandemic and urged the leaders to understand and do what they can for their people.

She added that the corona virus has no boundaries and there is no evidence to suggest it will not come to the Western Highlands Province.