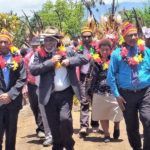 The people of Komkui and neighbouring villages in the Hagen Central District of Western Highlands will now receive health services at their doorstep.

This follows the opening of a new Community Health Post (CHP) at Wagbel village on the outskirts of Mt Hagen City towards the end of March 2020.

The CHP cost more than K1 million to build and was funded jointly by the Western Highlands Provincial Health Authority (WHPHA) and the Australian Department of Foreign Affairs and Trade (DFAT) on a kina for kina basis where every kina the WHPHA had spent had been equally matched by DFAT.

The Member for Hagen Open and Minister for Commerce and Industry, Hon William Duma had also contributed K100,000 towards the setting up of the facility.

Deputy Chairman of the WHPHA Board, Mr Michael Pundia officially opened the facility on 20th March, witnessed by about 200 people from the local community as well as members of the Provincial Health Authority senior executive management.

A women’s “weldo” (dance) group dressed in traditional costume led the dignitaries to the main stage for the official opening of the CHP which would serve more than 12,000 people from the local community as well as the surrounding areas.

Many of the local leaders who spoke at the ceremony including Councillor Jacob Wari and his predecessor, Mr Thomas Wama thanked the WHPHA for building the CHP in their area and urged their people to look after it well.

Director for Clinical Excellence, Research and Training, Dr Paulus Ripa said the WHPHA wanted to provide a quality health service for the people and would make available four senior clinicians including a health extension officer, nurse and a midwife to work there.

He said in the next two years the WHPHA would aim to upskill many of its staff at Mt Hagen Hospital as well as in the rural facilities in order to lift the standard of services provided at these facilities.

He also told the people that Mt Hagen Hospital would only attend to referrals and urged them to seek treatment for minor illnesses such as cold, flu and headache at the nearest facility.

Dr Ripa said children should also be immunised against deadly diseases such as measles, polio and whooping cough to protect them from contracting these diseases at an early age.

Deputy Board Chairman, Michael Pundia when opening the CHP told the people to trust and have confidence in national doctors, nurses and other health workers to treat them well.

He said the WHPHA had trust and confidence in the Komkui community to look after essential services provided such as the new CHP and urged them to show that by looking after the facility and its staff well.