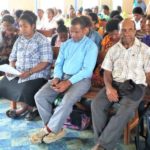 Staff of the Western Highlands Provincial Health Authority are gradually being inducted into the National Public Service.

The latest group was inducted in mid-March where a total of 98 staff had received certificates after completing the week-long training which was conducted over two weeks due to the big number of inductees.

The induction helps the staff to have a better understanding of the National Public Service Code of Ethics and what they are required to do as servants of the public.

A spokesperson for the employees, Dr Palo Haitawo of the Dental Clinic said many of the employees had spent a good number of years with the organisation but unfortunately they did not know much about the Public Service Code of Ethics and the General Orders.

He said as such they did not know much about their duties as public servants and the training had helped them to understand it better and thanked the management for giving them the opportunity to be trained.

“I thank the management for giving recognition to us and training us to know more about our roles and responsibilities and how effectively we can serve the public”, Dr Haitawo said.

Acting Chief Executive Officer, Ms Jane Holden told the inductees that timeliness and punctuality were very important for public servants in order for them to discharge their duties effectively.

Ms Holden said they were public sector employees who were covered under the Public Service Management Act and as such they must be punctual and execute their duties in a timely manner.

She added that those who graduated were from different sections of the organisation but they all had one aim and that was to achieve the goals and objectives of the WHPHA which meant that they must work together as a team and not individually.

“You are not an island working in the health sector, you are public sector employees working as a team. It is a humbling and privileged position that you hold so do not take it for granted but serve the people you are paid to do”, she said.