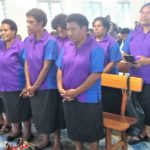 The graduates were presented with their certificates during a graduation ceremony at the Mt Hagen Hospital Chapel in early March. This was the 7th graduation under this program.

The all-female group who represented community health posts in the province and who lived on the hospital campus to undergo their training had gone through six months of intensive training in both theory and practical, mostly in maternal health and midwifery skills.

Facilitator of the course, Sr. Jolly Kulimbua said presentations by some of the CHWs who had completed their training and were providing the services had shown that such training was important as it helped them save the lives of many mothers and babies.

She said such vital training would not have been possible without the generous sponsorship of donor agencies such as UNICEF, Soroptomist International, DFAT and WHPHA and thanked them all for their continued support.

The graduation of the 8 CHWs brings to 63, the total number of staff from the WHPHA who have been upskilled with midwifery skills since the training commenced in 2012. Western Highlands is one of 12 provinces in the county who are conducting the CHW Upskilling Training Program.

Sr Jolly said UNICEF had funded the training for the second time in a row and she was very happy for its continued support and thanked its representative, Sr Paula Puawe Konga who was present for the graduation.

She said Marie Stopes had also contributed towards the training by imparting valuable skills to the CHWs who used them to treat patients and she was happy for their contribution as well.

The participants said they were very happy for the training they had received, saying it would help them to save the lives of many mothers and their babies in the rural areas whom they were unable to save previously.

Members of the Management team who witnessed the graduation spoke highly of the training program, saying it had significantly helped to reduce the mortality rate in the province and wanted to see all CHWs in the rural facilities upskilled with midwifery skills.