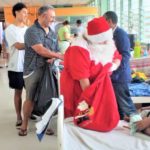 Tininga Group of Companies has once again put smiles on the faces of sick children at Mt Hagen Hospital this Christmas by visiting them at their beds and giving them lollies and presents.

Father Christmas in his usual happy mood, accompanied by company owners, Pat and Margie Duckworth and their children, made the children happy when they made a surprise visit on them on Christmas Day and distributed the presents.

The children and their parents or guardians were visibly surprised and happy to see the visitors when they visited them at each of their beds in ward six and gave them the lollies and presents and wished them speedy recovery.

Father Christmas (or Mother Christmas as it was a she) then made his way to the surgical ward where some children were recovering from various surgeries and gave similar presents and wished them well.

The final visit was to the Children’s Out-Patient Department which was not as busy this festive season and those children present received their share and more as there were plenty of lollies and presents left. Santa Claus also made the hardworking nurses happy by giving them what was left as well.

Pat and Margie were obviously happy to brighten up the day for the sick children but they were also saddened to learn that some children with chronic illnesses had been hospitalised for months, even up to a year.

As a retailer based in Mt Hagen, Tininga has been partnering with the Western Highlands Provincial Health Authority (WHPHA) in many ways and the presentation of lollies and presents was one way of helping the wider community of Western Highlands and the surrounding provinces.

In the past several years, the company has been assisting the WHPHA with its Heart Patient Project by meeting the cost of travel and accommodation for paediatric heart patients from Western Highlands and other neighbouring provinces to travel to Port Moresby for open heart surgery.

It has also spent money on the Well Women’s Clinic where women go for screening of cervical cancer, one of the main causes of death in women as well as counselling following domestic violence.

Chief Executive Officer of WHPHA, Mr David Vorst who accompanied Pat and Margie on their visit to the hospital thanked them for their continued support which he said helped many people, especially women and children in the Highlands region.