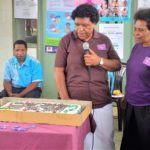 The International Prematurity Day on 17th November 2019 was observed and celebrated by many of the major hospitals in the country and Mt Hagen Hospital was no exception.

Doctors, nurses and community health workers from the Obstetrics and Gynaecology (O&G) Department of the Hospital observed the day on 15th November with much enthusiasm as they celebrated their achievements in saving the lives of many of the prematurely-born babies this year.

Two couples whose babies were born after seven months of pregnancy at 1.2kg each and who were cared for in the Special Care Nursery (SCN) until they reached 1.5kg and were discharged as healthy babies were also present to express their gratitude to the staff.

The parents said their babies could have died but through the love and care shown by the staff, they had survived and would now live to tell their own stories. ”We are very thankful and proud of all of you for caring for our babies and ensuring they survived”, they said.

Deputy Director of Nursing Clinical Services, Sr Joan Okk said she appreciated and acknowledged the efforts of the staff in the SCN for ensuring prematurely-born babies survived.

She said prematurely-born babies usually developed problems in the head, eyes, ears, hands, legs and other parts of the body but the good thing was that the SCN provided an environment that was similar, if not the same as the mother’s body to keep her baby warm and this prevented the babies from contracting a lot of the unwanted diseases.

“These kinds of kids will live if given the right care and attention so I encourage you to keep up the good work that you are doing and make those parents happy”, she told her staff.

Senior Medical Officer for Obstetrics and Gynaecology, Dr Joseph Kuk said more than 5,000 babies were delivered at the hospital last year and about 50 of them were born prematurely. He said about half of the 50 had also died.

Dr Kuk said many mothers who delivered at the hospital never visited the antenatal clinic for regular checks and this was one reason why many of the babies were born prematurely.

He also added that the SCN needed to be upgraded and installed with one or two incubators to help save the increasing number of prematurely-born babies who died.

He said the Western Highlands Provincial Health Authority (WHPHA) in partnership with agencies such as UNICEF funded a number of programs which saved many newborn babies and he encouraged them to continue the good work and help save many more lives.

Acting Chief Executive Officer of WHPHA, Dr Jonah Kurubi said the Kangaroo Mother Care program was a good initiative which helped reduce the number of premature deaths by 10 percent and he wanted to see it introduced in rural health facilities as well.