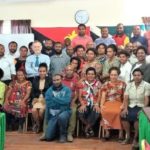 More WHPHA staff get inducted into the Public Service

More employees of the Western Highlands Provincial Health Authority (WHPHA) now have a better understanding of the National Public Service Code of Ethics and what they are required to do as servants of the public.

This follows their induction into the public service following a number of training courses conducted by the Training Section of the National Department of Health (NDoH) over the last few years.

The Department conducted two such courses recently at the Travellers Hut outside Mt Hagen Hospital from 2-13 December 2019 where 91 employees were inducted.

The training course was conducted jointly by Mrs Juliana Aihi, a training officer with NDoH and Sr Jolly Kulimbua, Sr Nellie Newman and Mrs Lilian Urae from the WHPHA Training Unit. It was scheduled for one week but was conducted over two weeks due to the big number of employees waiting to be inducted.

The employees who included doctors, nurses, community health workers, carpenters, plumbers, electricians, hygiene and general support staff had served the organisation for various numbers of years ranging from one to five years.

A spokesperson for the inductees, Dr Stanley Malen said many of them had been working for 5-6 years but did not know much about the public service code of ethics and their duties as public servants and the training was a big eye opener for them.

He said the employees would now use the skills and knowledge gained to do the right things for which they were paid to do – serve the people – and thanked the management of WHPHA for approving and funding the training.

Chief Executive Officer of the WHPHA, Mr David Vorst when closing the training course said it was wonderful to see the staff go through such training and understand what they needed to do as servants of the public.

“We are here to serve the public – patient care is our core business to make Western Highlands a healthy place in which to live.

“It is important that you understand and practise the things you have learnt, particularly the code of ethics. We must believe in our core business and do the right thing – don’t let anyone or anything get in the way,” Mr Vorst said.

He also told the participants that WHPHA was one of a few PHAs that was using village health volunteers (VHVs) to help save expecting mothers and newborn babies and their involvement was having a profound impact on maternal and child mortality in the province.

He said through the use of VHVs, the number of deliveries in health facilities had increased by 30 percent this year and this was welcome news for everyone including village leaders, councillors, health workers and politicians and the general community.