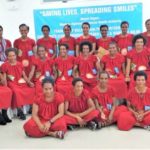 Expectant mothers in the Tambul/Nebilyer District of Western Highlands can now expect immediate help to prepare them for delivery at the nearest health facility.

This follows the training and graduation of more than 80 Village Health Volunteers (VHV) on how to help expecting mothers when they go into labour and later take them to the nearest health facility to deliver.

The VHVs were trained in four batches of about 20 participants each with each batch undergoing four weeks of intensive training in both theory and practical at the Mt Hagen Hospital campus during the whole of 2019.

The participants have been selected from all parts of the district to ensure there was a VHV in each Local Level Government Council Ward to help mothers from that ward delver safely.

The United Nations International Children’s Emergency Fund (UNICEF), as part of its ongoing efforts to help reduce child mortality in the country has funded all the four trainings in collaboration with the Western Highlands Provincial Health Authority (WHPHA).

Clinical trainers from the WHPHA conducted all the four trainings at Mt Hagen Hospital where the women had been accommodated, fed and trained.

The District Health Manager for Tambul/Nebilyer, Smee Rank said he was very happy with the program as it has helped increase the number of deliveries in health facilities from just 34 in 2018 to 136 this year.

He said this was a very big improvement, given the size of the district and thanked the husbands for allowing their wives to be trained as VHVs and the local councillors for taking the lead in encouraging the local women to take up such training to help their pregnant colleagues deliver safely.

WHPHA’s Deputy Director Family Health Services, Dannex Kumamu thanked UNICEF Australia for funding the program, saying if it was not for this international organisation, many mothers and newborns in the Tambul/Nebilyer District would die.

He said the Saving Lives Spreading Smiles (SLSS) program which was part of this program to help save lives of prematurely-born babies was a joint initiative of UNICEF and WHPHA and he was proud this program was now being used across the country to save babies.

“The importance of this gathering is these volunteers. Without them many mothers and children can die and I say that you mothers are very important people”, he said.

Mr Kupamu told the graduates that as health volunteers in the province, they would also enjoy the same privileges as other health workers and would be issued with WHPHA identification cards to allow them to access free health services for themselves and their husbands and children.

Chief Executive Officer of the WHPHA, Mr David Vorst said what had been witnessed during the day was a team effort to save the lives of expectant mothers and newborn babies and thanked the VHVs for offering to be trained.

“Communities in the district need to understand what VHVs do and councillors must go back and tell everyone in their respective wards about what this program can do to help save lives.

“You all must be proud of the high impact this program has on newborns in your district and support more mothers to be trained. They are not to deliver babies but take expectant mothers to hospitals to deliver safely”, he said.

The participants said they were thankful for the training they had received which had equipped them with new knowledge to help mothers deliver safely.

They were also presented with certificates as well as handbags, wool caps, jackets, gum boots, umbrellas, solar lights/torches and CUG mobile phones to help them carry out their work effectively.