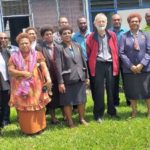 An Audit team appointed by the Minister for Public Service, Hon Westley Nukundj to look into the manpower and staffing, organisational structure and payroll of the Western Highlands Provincial Health Authority (WHPHA) has commenced work this week.

The team of six senior officers from the Department of Personnel Management led by Deputy Secretary for Compliance, Assessment, Monitoring & Reporting and Corporate Affairs, Agnes Friday arrived on Wednesday and was welcomed and briefed by the Chief Executive Officer of the WHPHA, Mr David Vorst.

The team then met with the Senior Executive Management of the WHPHA the next morning where Mrs Friday introduced her team and explained why they were in Mt Hagen and what they would do.

Mrs Friday said the audit was a directive from the Prime Minister, James Marape which Minister Nukundj was implementing as part of a revamp of the public service to ensure the right number of public servants were employed under the approved structures of each department and organisation.

The Minister for Public Service was directed by the Prime Minister to urgently commence work on the manpower, organisational and payroll audits in the Public Service and was assigned five Key Result Areas (KRAs) to achieve during the term of this Government, she said.

She said her team whilst with the WHPHA would conduct an onsite audit of the manpower/staffing to determine the extent of abuse, if any, or non-compliance resulting in discrepancies in the names and total number of employees on both the payroll information and personnel records.

There are nine Terms of Reference (ToR) for the audit team to carry out including visiting all WHPHA establishments throughout the province to conduct the required audit as well as to take photographs of all occupants of funded positions.

At the conclusion of the audit, the team will present its findings in a final report to the Public Service Minister with recommendations for appropriate measures to address problems and issues identified during the conduct of the audit.

The team will spend three weeks in the province to carry out and complete its tasks.