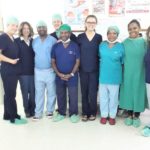 Many partially or completely blind people in the Western Highlands and neighbouring provinces are now able to see again, thanks to the visiting Youth With A Mission (YWAM) team from Hawaii.

An eye specialist and two nurses from YWAM assisted by the Western Highlands Provincial Health Authority’s ophthalmology team led by its eye specialist, Dr Waimbe Wahamu have created miracles following successful surgery for many who could not previously see.

The visiting YWAM team spent ten days in Mt Hagen recently and with the help of the WHPHA team, operated on a total of 113 cases, all of them successful with the patients returning home feeling well and happy with their sight restored.

According to Dr Wahamu, it took nine days for the surgical team to operate on the patients where 98 of them had cataracts removed while 14 of them were operated on for Pterygiums and one for Band keratopathy.

He said a majority of the patients were from Western Highlands and those operated on were mostly older people who were either partially or completely blind.

Dr Wahamu said he was happy for the visiting YWAM team who had helped to reduce a backlog of eye surgeries that had been waiting to be done and thanked them for their kind gesture.

He has also thanked his own team as well as other WHPHA staff such as doctors, nurses, theatre and support staff who had helped in one way or another to make the surgical operation a great success.

“I would like to sincerely thank each and every one of you for your understanding and support in making this eye surgical operation a great success.

“It is a testimony of how team work can achieve much for our patients who seek our care. Our friends from YWAM have really enjoyed their stay and have been a great blessing to us all.

“Together we have operated 113 cases in nine days of surgery and our patients are all well and have gone home with their sight restored. They will live to tell their story so keep up the great team spirit”, Dr Wahamu said.

Chief Executive Officer of the WHPHA, Mr David Vorst said management was very proud of the great team effort that had been put in by all concerned to make our patients happy and thanked them including the YWAM team for a great effort.