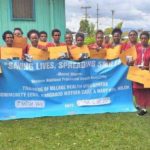 Tambul/Nebilyer District in Western Highlands is blessed with more Village Health Volunteers (VHV) to provide professional help to pregnant mothers in their villages to deliver safely.

This follows the graduation of 18 women on Friday, 6th September 2019, after completing four weeks of intensive training on how to help expecting mothers when they go into labour and later take them to the nearest health facility to deliver.

The graduation followed another two in January and May this year where a total of 38 village health volunteers from the district had graduated, bringing the grand total to 56 VHVs to work in the district.

As part of its ongoing efforts to help reduce child mortality in the country, the United Nations International Children’s Emergency Fund (UNICEF) has funded all the three trainings.

Clinical trainers from the Western Highlands Provincial Health Authority conducted all the three trainings at the Mt Hagen Hospital campus where the women had been accommodated, fed and trained in both theory and practical skills.

A Senior Medical Officer in Obstetrics and Gynaecology at Mt Hagen Hospital, Dr Joseph Kuk told the graduating women that their work would not be effective without the support of their husbands and fathers.

He also urged facility OICs, ward councillors, presidents, the district CEO and other community leaders to support the VHVs to do their work effectively.

“We need to work in partnership in order to help our pregnant mothers to deliver safely. I thank all you husbands and fathers who are here today to witness your wives graduate for allowing them to leave home for four weeks to undergo this training”, he said.

He said the graduates must remember that their job was to help bring expecting mothers to the nearest health facilities to deliver and not for them to help deliver.

He also thanked the WHPHA management and UNICEF for making the training possible and conducting it to help save mothers and new born babies.

Acting Chief Executive Officer, Sr. Janet Yamu said training of VHVs was an important program because many lives had been lost in the past and these women would now use their newly-acquired skills to help reduce the number of deaths in mothers and children.

She said the work of VHVs was a voluntary job and thanked all the women who had put up their hands to be trained to help other mothers and new born babies.

“Child mortality is very high in PNG compared to other countries in the Pacific and expecting mothers must cooperate with the village health volunteers and midwives who will be their partners for life to help deliver safely”, she said.

The participants said they were thankful for the training they had received which had equipped them with new knowledge to help mothers deliver safely.

They were also presented with certificates as well as handbags, wool caps, jackets, gum boots, umbrellas, solar lights/torches and CUG mobile phones to help them carry out their work effectively.