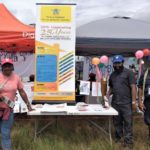 This year’s annual Mt Hagen Cultural Show which was held from 17th – 18th August 2019 had attracted many people including tourists from around the world.

Many traditional dancing groups from the Highlands region as well as coastal provinces had also made their presence felt by displaying their colourful costumes in performances which had attracted many show goers, especially tourists who captured them all on camera.

Companies and organisations based in Mt Hagen also used the opportunity to display and sell their products and services.

Food stall holders also ensured those who were hungry did not have to look far to fill up their stomachs by preparing and selling cooked food as well as snacks and drinks.

The Western Highlands Provincial Health Authority used the event to conduct awareness on various health issues including lifestyle diseases which are currently claiming many lives due to the uncontrolled eating habits of many people.

A mobile blood bank clinic was also set up where the public was advised of the need to check their blood levels and to also donate blood to save lives and many people responded favourably.

The management of the WHPHA has acknowledged and thanked the staff who had worked during the two days to help promote health activities as well as carry out awareness on preventable diseases.

“We hope those people who visited our stalls have learnt something worthwhile that would help them and their families”, said Chief Executive Officer, David Vorst.