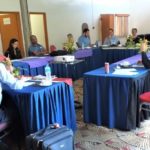 The two-day meeting which was hosted by the Western Highlands Provincial Health Authority (WHPHA) and funded by the Oil Search Foundation (OSF) was held at the Highlander Hotel from 20th – 21st August 2019.

Chairman of the WHPHA, Mr David Guinn in welcoming the participants said there were many health issues faced by the country that needed urgent attention and regional forums such as this were good avenues to discuss them.

He said there were a number of regional issues on the agenda for discussion including the issue of drugs and consumables, a regional care plan for the Highlands, a regional IT program and an update on legal issues affecting the legislative framework within which health services were delivered.

Mr Guinn said the issue of shortage of drugs and medical consumables was faced by all health institutions across the country and the forum needed to come up with some constructive ideas as to how it can be addressed.

The Chief Executive Officer of WHPHA, Mr David Vorst echoed similar sentiments and suggested that the meeting prepare a paper on the drugs issue as a regional body and submit it to the Health Minister, seeking his approval to order drugs directly from overseas suppliers.

He said when the Prime Minister’s Audit team visited the WHPHA early this year, his management team had proposed the Chennai model to create an authority to deal with and procure drugs directly from overseas (India) and the Health Minister had agreed to the idea and had given his approval.

“We have told the National Department of Health and the Health Minister about our proposal to purchase drugs directly from overseas and they have given us approval to order what we want and where as long as we have the money.

“Therefore we propose that we prepare a regional procurement plan and submit it to the Minister as a regional body to procure drugs for our hospitals instead of waiting for Borneo to do it for us”, Mr Vorst said.

He also told the meeting that Mt Hagen Hospital being the regional referral hospital was admitting many patients from throughout the region. He said 20% of adult admissions and 30% of paediatric admissions come from outside the WHP and this was putting significant pressure on already scarce resources.

Mr Guinn said that under a regional care plan, referral systems would be in place to improve clinical care and strengthen clinical governance and utilise the small number of Senior Medical Officers across the region to benefit everyone through improved patient care and skills upgrading of more junior doctors.

The resolutions and recommendations from this meeting would be presented at the next regional meeting for further deliberation and action.