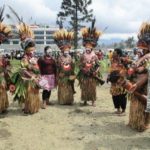 Papua New Guinea would become a safe, healthy and wealthy nation by the year 2050 if the people ate the right kinds of food and kept themselves healthy.

Minister for Health and HIV/AIDS, Hon Elias Kapavore said this in Mt Hagen recently while delivering his keynote address during the celebrations to mark 25 years of strong governance to the community by the Western Highlands Provincial Health Authority.

He said if people ate more garden produce and less processed foods, they would keep themselves healthy and contribute more to the wealth of this nation.

Minister Kapavore said the saddest thing was that because a lot of people were not eating the right kinds of food, many young people between the ages of 30 and 40 were looking a lot older than they should be.

Whilst speaking in the presence of Western Highlands Governor, Paias Wingti, Mr Kapavore said the Governor’s message to the people to work their land and eat garden produce to keep healthy was the way go for a healthy and prosperous nation.

He also commended Governor Wingti for introducing the hospital board system in 1994 when he was prime minister, saying through this system which involved both private and public sector partnership, most public hospitals were now operating successfully.

The Minister also said that later when the Provincial Health Authorities Act 2007 was passed by Parliament, Western Highlands was the first to have a provincial health authority established in 2011 and he was pleased the system was operating effectively in the province.

He said because it was operating effectively, donor agencies were keen and willing to assist with funding to improve its services as well as to build new infrastructure to enable more people to have access to health services.

The Managing Director of Mt Hagen-based Tininga Group of Companies, Pat Duckworth speaking on behalf of the business community, congratulated the Board of Mt Hagen Hospital and Western Highlands Provincial Health Authority (WHPHA) for providing strong governance and leadership in the last 25 years.

Mr Duckworth said he had big respect for Mt Hagen Hospital and the WHPHA because the hospital was a regional referral hospital whose services benefited not only the people of Western Highlands but other neighbouring provinces as well.

He said when his company made a decision to assist someone, it looked at organisations such as the hospital and WHPHA because there was good leadership and more people benefited from their services.

“We are Hagen-based and when we want to help, we look at an organisation where all the people of Western Highlands will benefit from and not just one group only.

“We look at good leadership and strong governance and we see that Mt Hagen Hospital and WHPHA have that so we assist them to assist not only the people of Western Highlands but other provinces as well who seek their services,” Mr Duckworth said.

Chairman of the WHPHA Board, David Guinn said the Board system had seen much improvement in the delivery of health services in the country and commended Governor Wingti for introducing it.

He said in the Western Highlands where he had been Board Chairman of Mt Hagen Hospital since 1994 and later continued in the same role when the WHPHA was established in 2011, much had been done to improve health services in the province.

Mr Guinn said through the hard work of the Board members as well as the senior executive management and staff, Mt Hagen Hospital has become one of the best hospitals in the PNG health system and he was proud to have been involved with this transformation.

He said he was also pleased that the new WHPHA Board had worked tirelessly with the senior executive management team over the last few years to continue to improve health services as well as infrastructure development.

“With the assistance from Government, our National Parliamentarians, donor agencies such as DFAT and ADB, NGOs and FBOs, much had been achieved in improving the services available to the people”, he concluded.