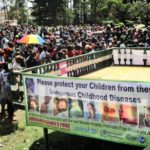 The Western Highlands Provincial Health Authority (WHPHA) was among other health institutions in the country who officially launched the measles-rubella and polio vaccination campaign this week.

The supplementary immunisation campaign will be carried out by respective health institutions throughout the country from 11th June to 7th July 2019. Under the program those in age group six months to under five years will receive the measles and rubella injection as well as the polio drop while those new born to under six months will only receive the polio drop.

The program in the Western Highlands was launched at the Queen’s Park in Mt Hagen City on Tuesday, 11th June following a police-escorted drive around the city streets by a convoy of provincial health authority vehicles and others decorated with posters of children being immunised against these diseases.

A live band had also played a song composed for the immunisation program with the key message of having children immunised against measles-rubella and polio during the launch at the Queen’s Park.

School children from the nearby Hagen T Primary School marched with a banner emphasising the importance of the immunisation program as well while the WHPHA set up a vaccination stall at the park and vaccinated children.

Many of the speakers who addressed the crowd spoke of the importance of having young children immunised against these diseases to avoid death and life-long paralysis.

They said all these diseases had no cure if contracted and added that the only way to protect the children from catching these dangerous diseases was through vaccination.

A Senior Education Officer representing the Department of Western Highlands, Rose Johns thanked staff of the Western Highlands Provincial Health Authority and other partners for spearheading the fight against these deadly diseases.

She said children were vulnerable to such diseases and it was the responsibility of all parents to ensure their children were immunised.

Ms Johns added that she would make it her business to advise all schools in the province, especially elementary and kindergarten schools to ensure their children were immunised against these diseases.

World Health Organisation consultant, Dr Lei and UNICEF consultant, Dr Shailesh who were also present told the crowd that these diseases were dangerous and that all children under five years must be vaccinated.

Dr Shailesh asked the crowd to make a commitment that they would go back to their respective communities and pass on this information to the parents or caregivers to bring children under 5 years to the nearest health centre or clinic point for vaccination and the crowd responded with a big roar of “yes we will do it”.

Pictured are some of the scenes during the launching of the Measles-Rubella and Polio vaccination campaign in Mt Hagen: