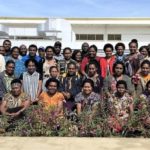 Forty-five health care workers who deal with sick children from major health facilities in the Highlands region are now equipped with more advanced knowledge and skills on how to care for paediatric patients.

The doctors, nurses, health extension officers and community health workers have spent a week in Mt Hagen, undergoing intensive training in Hospital Care for Children to upskill their knowledge on children’s health.

About 6-7 health care workers from each of the seven Highlands provinces of Hela, Southern Highlands, Enga, Western Highlands, Jiwaka, Simbu and Eastern Highlands attended the training workshop which was conducted at Mt Hagen Hospital from 17th – 21st June 2019.

A visiting specialist from Melbourne University, Prof Trevor Duke who specialises in paediatric intensive care conducted the training. He is also an Adjunct Professor of Child Health at the University of PNG and coordinates specialist child health training in PNG and the Solomon Islands and has been at the forefront of setting up and running this program in the two countries.

The participants who were selected from major health facilities such as hospitals and health centres throughout the region were put through intensive training on common diseases that are the cause of child mortality such as pneumonia, diarrheal diseases and severe malnutrition.

Pneumonia is the most common cause of paediatric admissions and deaths in the country and the participants have been trained on among other areas, the use of oxygen concentrators and how to give oxygen to these children.

The participants were told that through the use of such measures, paediatric deaths in the country had been steadily reduced and for the first time the case fatality rate in PNG hospitals had fallen below 7% in 2018.

At Mt Hagen Hospital, deaths in children had fallen steadily from all causes from 7% of all admissions in 2013 to only 3.5% in 2018. A major contributor to this fall in death rates was due to the ongoing training of all staff annually including this one which is the fourth such training.

The training program which has been developed in PNG and spearheaded by the Paediatric Society of PNG was first trialled in the country in 2012 and has since been widely accepted and used throughout the country.

The World Health Organisation has also adopted it for use in other countries in the Asia/Pacific region as well as Africa and has been translated into many different languages.

Chief Executive Officer of the Western Highlands Provincial Health Authority, Mr David Vorst when officially opening the training workshop welcomed the participants and urged them to learn as much as possible, especially those from the rural facilities who did not have as much opportunity to learn as those in major hospitals.

The training program has been sponsored by the Ross Foundation of Victoria, Australia.

The participants listening attentively during the theory part of the training and below, they pose with their facilitators for a group picture.: