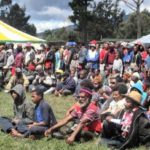 Hundreds turn up to celebrate with WHPHA

People from all parts of the Tambul/Nebilyer District gathered at the station as early as 8am to view displays of posters on healthy living as well as to hear health messages from senior executives of the WHPHA and other invited guests.

Non-Government Organisation partners such as Susu Mamas, Marie Stopes and Anglicare also set up their own stalls to inform the public about the services they provided and where they could access them.

Staff from the various sections of the WHPHA also set up stalls inside a big tent and screened those who sought their advice and assistance.

The Health Promotion team also displayed posters on healthy living and held audiences with the public on community health issues and what they should do to protect themselves from catching preventable diseases such as typhoid and pneumonia.

A major part of the celebrations was the screening of various health documentaries inside the tent which attracted a huge audience, especially children.

Chief Executive Officer of the WHPHA, David Vorst thanked all those who turned up to celebrate with the authority and added that the health authority wanted to work closely with the Tambul/Nebilyer District Development Authority to provide what people needed.

He told the people that the WHPHA had a commitment to complete the construction of the Tambul, Kotna and Tinsley District Hospitals so that they could receive vital health services at their doorsteps.

He added that the Chairman of the WHPHA Board, David Guinn has been having talks with the Australian High Commissioner to PNG and there have been positive indications of these projects being completed with funding provided by the Australian Department of Foreign Affairs and Trade.

“We will continue to work closely with you all to provide what you need”, he said, attracting a big roar and applause from the audience.

Community leaders who spoke at the celebrations said health workers were life savers on this earth and they must commit themselves fully to their jobs. They said on some occasions staff never turned up for work and patients had to look for them in their houses which should never happen.

WHPHA’s acting Director for Population Health, Dr Madison Dat urged the people to take ownership of their own health and avoid getting sick from preventable diseases.

“Health is not about medicine or injection – it is about looking after yourself and eating the right foods and keeping healthy”, he said.

Tambul is the second venue for the celebrations to be held after Tinsley. The next venue will be Nunga in Dei District on 20th June followed by Hagen Central towards the end of June where the celebrations will end.

The pictures show what happened at Tambul Station during the celebrations to mark the WHPHA’s 25 years of strong governance to the community in WHP: