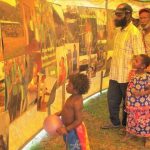 Twenty-five years of strong governance to the community in WHP

The celebrations which were held on the grounds of the Tinsley District Hospital at Baiyer River in the Mul/Baiyer District had attracted a huge crowd, mostly people with health issues who wanted to know where they could seek medical advice and assistance.

Mul/Baiyer is the first district in the province for the celebrations to be held, followed by the other three districts of Tambul/Nebilyer, Dei and Hagen Central respectively next month. The two-day celebrations at Tinsley were held from the 23rd – 24th May 2019.

Staff from the various sections of the WHPHA set up stalls inside a big tent and screened those who sought their advice and assistance.

The Health Promotion team also displayed posters on healthy living and held audiences with the public on community health issues and what they should do to protect themselves from catching preventable diseases such as malaria, typhoid and diarrhoea.

Health partners such as Marie Stopes were also present to talk to the people about the services that they provided, enabling everyone to know about whom they should see or go to for medical advice and assistance whenever they needed it.

WHPHA’s Acting Director for Clinical Network and Mt Hagen Hospital Manager, Jane Holden told the people that the authority was working to ensure good systems were put in place for supplies of drugs and services to reach the districts.

She added that nurses at Mt Hagen Hospital and those in the districts were also being rotated to give them more skills to do more in the facilities they worked in. Ms Holden said it would also improve referrals between WHPHA facilities.

Chief Executive Officer, Mr. David Vorst thanked all the staff that were doing screening in their respective stalls in the tent, saying that what they were doing was important as it would help the people to know exactly what to do and where to go to for further assistance.

He said the WHPHA’s aim was to ensure the population in Western Highlands was healthy and he said WHPHA had a strong focus on maternal and child health. He said women in particular were important because they played such a significant role in the economy of the province particularly through agriculture.

Deputy Chairman of the WHPHA Board, Mr Michael Pundia thanked donor agencies and churches for partnering with the WHPHA to provide much needed health services in the province.

He said donor agencies such as the Australian Department of Foreign Affairs and Tradeand the Asian Development Bank through the Rural Primary Health Services Delivery Project had funded many infrastructure development projects and he was grateful for their support.

Mr Pundia said he was also thankful to church health services such as the Baptist Union of PNG and the Catholic and Lutheran Churches as well as others who provided health services in some of the remote parts of the province where WHPHA could not reach.

He also praised the workforce saying, “Our workforce has been very committed to their duties and responsibilities in ensuring all those who seek our care are attended to and I thank all our staff and the management team for their commitment”.

He added that many had reached retirement age and would leave but those who still had energy to continue, they would be welcome because health was a never ending service which required more employees to continue to provide that service.

During the celebrations, the WHPHA also presented a lawn mower donated by Mitre Hardware to the district health services for all health facilities in the Mul/Baiyer District to use and a two-burner gas cooker and bottle to Kalakai Aidpost in the Lumusa area.

The activities that took place during the open day at Tinsley: