Orientation of USAID HIV Support in PNG Program in WHP

A new aid program supporting HIV interventions in PNG is helping to reduce the spread of HIV/AIDS in the country.

Known as the USAID HIV Support in PNG Program, the aid is provided by the people of America and is managed by FHI 360 (Family Health International) to fund initiatives by health partners to reduce the spread of HIV, especially among children.

A project orientation meeting was held at the Western Highlands Provincial Health Authority (WHPHA) Conference Room in Mt Hagen recently in which a team from FHI 360 briefed the management and partners on the availability of the fund and how it can be accessed.

Western Highlands is the second province after the National Capital District where the fund is being introduced and accessed.

Team leader and FHI’s Country Director, Daniel Tesfaye said the visit to Mt Hagen was mainly to introduce the program and to orientate service providers and others on the scope, goals and objectives of the program as well as the provision of technical assistance.

Chief Executive Officer of WHPHA, David Vorst welcomed the team to Mt Hagen and said the province had a group of very active partners who would work closely with FHI 360 to reduce the spread of the HIV virus.

He said the active participation of the partners resulted in the birth of many HIV negative children who were born to a HIV positive mother. He believed the involvement of FHI would strengthen the response to HIV and prevent the spread of the virus while at the same time providing adequate treatment for those already infected.

WHPHA’s HIV Program Coordinator, Petrus Kombea when giving an overview of HIV response in the province said all HIV positive patients were monitored and treated at ART service sites in all four districts of the province as well as the Tininga Clinic and all paediatric cases were treated at the Hilary Clinic at Mt Hagen Hospital.

Director of Public Health in the National Capital District, Dr Morimai Ipai said working with service partners through the use of the fund has greatly improved his organisation’s efforts to reduce the spread of HIV in the nation’s capital and Western Highlands was certain to benefit from it.

The briefing session attracted nearly all partners in the province including Susu Mamas, Anglicare, Catholic Health Services and Tininga HIV/AIDS Clinic at Mt Hagen Hospital and all were happy with the new aid program which would further strengthen their services.

The participants during the briefing of the USAID HIV Support Program at the WHPHA Conference Room in Mt Hagen: 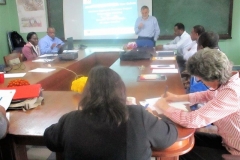 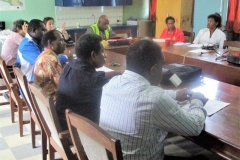 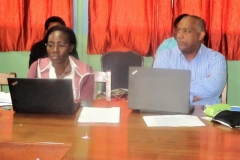