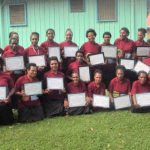 The Western Highlands Provincial Health Authority (WHPHA) has graduated another group of Village Health Volunteers (VHV) who will provide professional assistance to expecting mothers in their respective villages to deliver safely.

The month-long training which involved both theory and practical sessions has been funded by the United Nations International Children’s Emergency Fund (UNICEF) as part of its ongoing efforts to help reduce child mortality in the country.

The 21 women, all from the Tambul/Nebilyer District of Western Highlands, have been trained on how to help expecting mothers when they go into labour and later take them to the nearest health facility to deliver.

The training which ended on Friday, 10th May 2019 was conducted by WHPHA trainers at the Mt Hagen Hospital campus where the women were accommodated and fed and also did their practical training.

Early this year, 17 women from the same district were put through the same training and they are now reported to be doing well in helping expectant mothers in their respective villages to deliver safely in health facilities.

A third course for the same district will be conducted later this year before it is rolled out to the other three districts of the province namely Dei, Mul/Baiyer and Hagen Central.

A Senior Medical Officer in Obstetrics and Gynaecology at Mt Hagen Hospital, Dr Joseph Kuk told the graduating women that for them to carry out their work effectively, their husbands and fathers needed to support them.

“We need to help each other and work in partnership in order to help our pregnant mothers to deliver safely. I thank all you husbands and fathers who are here today to witness your wives graduate for allowing them to leave home for four weeks to undergo this training”, he said.

Dr Kuk said as VHVs, the women were now recognised as staff of the WHPHA and as such they would enjoy the same privilege as other staff and receive free medical treatment for themselves and their immediate family members at any health facility in the province.

WHPHA’s Acting Director for Population Health, Dr Maddison Dat congratulated the 21 women for successfully completing the training course and thanked UNICEF for sponsoring it by meeting all the expenses.

He also revealed that UNICEF would also set up wind mills to generate water and solar systems to generate power at all health facilities to further improve the health of our people.

The participants said they were thankful for the training they had received and would do their best to help their womenfolk deliver safely. They were also presented with certificates as well as CUG mobile phones, coats, boots, umbrellas and solar lights/torches to help them carry out their work effectively.