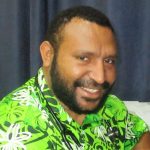 Doctors from Mt Hagen Hospital pursuing their Masters programs have done well in part 1 of their MMed (Masters in Medicine) examination in the last three years.

Out of 40 – 50 registrars who sit for the common core exam each year, Mt Hagen Hospital doctors have been among the highest scorers since 2016, ranking first and third in 2016, first and fourth in 2017 and second this year.

This year’s highest scorer in the common core which includes basic science units such as molecular biology, physiology, pharmacology and pathology was Mt Hagen Hospital Registrar, Dr Stanley Malen who ranked second in a field of 33 candidates.

He was also one of three doctors to score High Distinction.

The common core exam which is undertaken by candidates from all specialties is traditionally difficult for candidates from the provinces to pass, according to a former lecturer, because all the basic science lecturers are based at the Taurama Medical Faculty of the University of PNG.

However, Mt Hagen Hospital doctors have done well because they work for an organisation that has one of the most up-to-date Information Technology (IT) systems which has helped them to access learning materials.

In the absence of lecturers, the doctors have been able to access the internet and download lectures and tutorials to study and this has prepared them well for their exams.

In addition, the doctors are also privileged to have some of the best Specialist Medical Officers in the respective departments as well as an experienced former lecturer of the UPNG Medical School who constantly mentor the young registrars which has helped them to do well.

Dr Malen who is the only registrar in internal medicine at Mt Hagen Hospital will now prepare himself for part 2 of the four-year MMed program.

Doctors who did well in the previous two years were James Tony (first) and Rebecca Kai (third) in 2016 and Dr Lucas Kondi (first) and Dr John Gabriel (fourth) in 2017.

Dr Malen is from Kandep in Enga Province but was born and raised in Kainantu, Eastern Highlands where his father was adopted and raised by a local.

He attended primary and secondary schools in Kainantu before enrolling at the Medical Faculty in 2009 and graduating in early 2014.

He completed his two years of residency at the Port Moresby General Hospital before accepting an offer to work at Mt Hagen Hospital in March 2016.

The management and staff of the Western Highlands Provincial Health Authority join hands in congratulating Dr Malen and the other four doctors for successfully completing part 1 of their MMed program and wish them success in the rest of the exams.