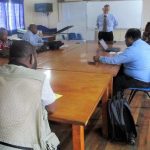 The absence of a specialist cancer treatment centre in the country equipped with proper tools, equipment and manpower to treat cancer patients is a major concern for the Health Department.

And senior health officials are now holding regional cancer outreach meetings with doctors and health administrators from each region in a bid to gather as much information as possible to put together a national cancer program to address this issue.

During its Highlands Regional Outreach meeting in Mt Hagen last week, doctors expressed concern that the absence of proper cancer screening tools and equipment, delays in histopathology diagnosis (can only be done in PMGH), lack of consistent and reliable supplies of chemotherapeutic drugs and absence of proper radiotherapy facilities were resulting in large numbers of unnecessary deaths from cancer.

This coupled with lack of awareness and late presentation by patients were contributing to this huge problem, they added.

The doctors said the National Department of Health (NDoH) wanted to establish oncology centres in major hospitals such as Mt Hagen, Goroka and Angau but a lot of work was needed to improve the facilities, train all levels of staff and ensure the appropriate equipment was in place.

They said the Health Department and its development partners together with the National Government needed to work together to address this issue.

The doctors suggested that one way to address this issue was for the Government to fund and establish a fully-equipped and staffed national state-of-the-art oncology centre to treat patients from all provinces.

The regional outreach meetings are held to gather as much information as possible on services provided so that an accurate and up-to-date report on cancer could be prepared for the Health Secretary to present to the Health Minister for action by the Government.

A number of presentations were made at the Mt Hagen meeting, mostly by doctors from Mt Hagen Hospital which the meeting said were useful and informative and would be included in a final report with recommendations for all stakeholders to see and action.

The acting Chief Executive Officer of the Western Highlands Provincial Health Authority (WHPHA), Mr David Vorst in welcoming the delegates said a national cancer treatment centre was fundamental to the growth of the nation.

He said the regional cancer meetings were held at a time when the WHPHA was currently negotiating with private enterprise, supported by NDoH to buy equipment and set up an oncology service under its redevelopment program and he welcomed the initiative taken.

Mr Vorst said Mt Hagen being the referral hospital for the Highlands region was a busy hospital serving nearly half the population of PNG and the quality of care provided was as good as anywhere in the country.

He said this year the WHPHA had spent in excess of K1.6 million to purchase drugs which the Health Department could not supply and it was hoped that under the redevelopment program, a regional drug procurement unit would be set up to have a good supply of drugs for the region.