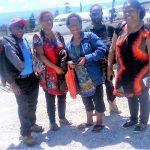 Western Highlands Provincial Health Authority (WHPHA) was one of several other health institutions in the country that sent clinical relief teams to Tari in Hela Province recently to assist with the treatment of earthquake-stricken patients.

The National Department of Health (NDoH) and Hela Provincial Health Authority had requested for such assistance after local staff of Tari Hospital could not cope with the influx of patients that had been injured by the 7.5 magnitude earthquake as well as a tribal fight.

The Western Highlands Provincial Health Authority had sent a team of 8 clinicians including a surgeon and a Health Extension Officer. It was led by the Deputy Director for District Curative Health Services, Dr Madison Dat.

The team spent more than two weeks in Tari, treating those injured by the massive earthquake that rocked Hela and other neighbouring provinces on 26th February 2018 as well as others who had been wounded during the tribal fight.

The fight between two warring clans was over the killing of a councillor and was reported to have taken place in the heart of Tari town before the team had arrived in the Hela capital.

The WHPHA team flew to Tari by helicopter and was later joined by other teams from NDoH, UNICEF, World Health Organisation and Non-Government Organisations. A team of 17 nurses from the Port Moresby General Hospital had also flown into Tari to assist.

According to team leader, Dr Dat, everything had gone smoothly until the second week when fighting had started again in the heart of the town with tribesmen chasing and shooting each other with guns, creating a lot of fear and anxiety among the public as well as the clinical staff.

He said despite the presence of armed disciplinary forces, the warring tribesmen had no respect for law and order and were firing guns at will, sending people in all directions for cover.

Dr Dat said because of the scary situation, his team and some others had to return early and leave the few in-patients behind for the Defence Force medical team and a few Tari Hospital staff to treat and look after them.

Meanwhile, a restaurant in Mt Hagen, The Sweet Spot, had shown great sympathy for the lives that had been lost as well as those that received serious injuries by assisting Mt Hagen Hospital with food to feed patients that had been transferred in from Tari.

The owners said the earthquake had caused a lot of damage to properties and lives that required the support of everyone and they had decided to feed the patients from Tari during the two weeks or so that they had been admitted.

The WHPHA has extended its heart-felt thanks and appreciation to the restaurant owners for stepping in and assisting the hospital during a time when it needed more food to feed the increasing number of in-patients.