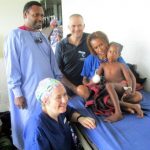 A team of six volunteer doctors and nurses from Australia has put smiles on the faces of more than 40 patients from the Highlands during a recent visit to the region.

The team of plastic surgeons, anaesthetists and registered nurses from Interplast Australia & New Zealand was at Mt Hagen Hospital from 12 – 22 February, 2018, carrying out plastic and reconstructive surgery on patients with external body disabilities.

The surgeries had all been successful and the team had returned to Australia on 23rd February, satisfied with the work it had done during the two weeks.

The team met its own return airfares to Mt Hagen to provide free surgical intervention programs to relieve people of disabilities such as cleft lip and palate, burns, tumours, hand injuries and contractures.

They had reviewed more than 80 patients and selected many of them, mostly children, to undergo surgery but they could not operate on all of them as they had had only two weeks and some surgeries had taken longer than others.

Dr Akule Danlop, a trainee plastic and reconstructive surgeon based at the Port Moresby General Hospital, had also accompanied the team to Mt Hagen and participated in the operations.

This was Interplast’s 6th visit to Mt Hagen Hospital and Dr Mark Strahan said the visits had been challenging but the team members were always happy when they saw smiles on the faces of their patients after the operations.

He added that the local doctors, nurses and anaesthetists had provided overwhelming support, resulting in the successful operations and he was thankful to them for their continued support and assistance.

Dr Strahan said there were about eight cases which were difficult to operate and had to be referred to Port Moresby General Hospital or overseas for major surgeries to be carried out.

Air Niugini’s General Manager Commercial, Mr. Dominic Kaumu said he understood that the team brought with it surgical equipment, drugs and medical consumables to be used and the airline had decided to assist by waiving 100kgs of excess baggage.

Interplast is a volunteer organization based in Melbourne, Australia, whose members provide free medical treatment to people living with a disability as a result of a congenital or an acquired condition including children suffering from burns.

Interplast Australia & New Zealand has been sending teams to Papua New Guinea every year since 1985 to provide free surgical intervention programs and Mt Hagen Hospital has been included on many of these visits in the past few years.

This year’s visit is the 111th by Interplast teams to Port Moresby, Lae, Rabaul and Mt Hagen and they have so far conducted more than 2,800 life-changing procedures in the country.