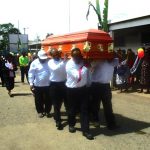 Anne Faith Tay, from Palimp Village on the outskirts of Mt Hagen City collapsed and died on Sunday, 9th July 2017 while on her way back to Mt Hagen Hospital after attending a village gathering.

She was in her late fifties and has left behind five grown up children – three girls and two boys and husband, Dr. Alphonse Tay who has been living a separate life from her for the last 19 years.

Sister Anne Faith had been a committed worker, having served as a nurse for 38 years, the last few years as a shift supervisor at Mt Hagen Hospital.

The Management and staff of the WHPHA held a funeral service at the Hospital Chapel on 14th July 2017 to pay their last respects and to officially bid her farewell before delivering her body to her relatives on the same day.

Colleagues who spoke at the funeral service said the late Sr. Anne Faith had taken with her, the vast knowledge and skills that she had acquired over the years and that it would take some time before anyone could fill the vacuum that she has left behind.

The then Acting Chief Executive Officer of the WHPHA, Mr. David Vorst when passing on his condolences on behalf of the Board, Management and staff to the immediate family members and relatives said the late sister had had the Authority’s core business of patient care at heart.

He said she knew what patient care was all about and she dedicated herself to looking after her patients with total commitment and the whole organization was sad to lose such a caring and hardworking employee.

Mr. Vorst said she would be gone for ever but her memory and all the good work that she had put into this organization would be long remembered by everyone.

He then personally led the convoy to Palimp village where the casket was delivered for her family to view the body before it was taken to her husband’s village where Mr. Vorst officially handed it over for burial.