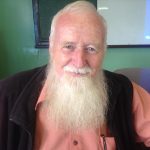 Fr Garrett Roche retires from WHPHA Board after 23 years

One of the long-serving Members of the Western Highlands Provincial Health Authority (WHPHA) Board, Fr Garrett (Garry) Roche has retired.

Fr Garry, a Catholic Priest, tendered his resignation after the meeting of the reinstated Board on 26th April 2017 after serving firstly on the Mt Hagen Hospital Board and later the Western Highlands Provincial Health Authority Board for a total of 23 years.

He was an inaugural Member of the Board of Mt Hagen Hospital when it was established in 1994 and later became a Member of the WHPHA Board when it took over in March 2011 to manage all health facilities in the Western Highlands, including the hospital. The other original Board Members who continue to serve on the current Board are the Chairman, Mr David Guinn and Jiwaka businessman, Mr Bob Hargreaves.

Fr Garry, who arrived in Papua New Guinea on 8th October 1970 from Fermoy in County Cork, Ireland, said he was retiring as it was time to step back from his various duties in PNG.

“My experience on both the Hospital and WHPHA Boards has been very positive and I believe both Boards have genuinely tried their best to provide a better health service for the people of Western Highlands.”

“We were successful in seeking financial assistance in the form of overseas funding as well as from local businesses and I am proud to have been a part of that decision-making”, he said.

He went on to say that being a Board Member was not always that easy. There were times when things did not seem to work well and staff and the public criticised the Board, but this was to be expected when working in an environment with limited resources and when implementing change.

He also said that through the Board he had come to recognise that there were many very hard-working public servants, both medical and administrative, and he realised that the great majority of the health workers were genuinely committed to improving the health of the people.

Fr Garry has also retired from his role with Divine Word University.

Chairman of the Board, Mr David Guinn said Fr Garry had contributed immensely to the governance of WHPHA and Mt Hagen General Hospital through his input at Board level and he was saddened to see him leave.

Mr Guinn said Fr Garry’s contribution as a Member of these Boards had been outstanding, not only in terms of the long-term personal commitment but also the enthusiasm to keep the Organisation moving forward with the aim of continuously improving health service delivery.

He said the Board had gone through a turbulent period in recent times, including false allegations made against it, but it showed commitment for people like Fr Garry and others who remained loyal to the WHPHA, which he greatly appreciated.

Further, during the suspension of the Board, Fr Garry had agreed to work with the Interim Board to ensure continuity of corporate knowledge and he was very appreciative of this contribution.

Mr Guinn conveyed his sincere thanks and appreciation to Fr Garry on behalf of the Board, Management and staff of the WHPHA for his long and dedicated service to the Organisation and through it to the people of the Western Highlands Province and wished him all the best for the future.