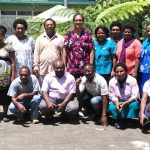 Malnutrition is the leading cause of morbidity in PNG but sadly it has been over-looked by concerned authorities, says a senior medical officer from the Western Highlands.

Dr. Madison Dat, the acting Director for Curative Health Services with the Western Highlands Provincial Health Authority (WHPHA) said despite this, he was happy that UNICEF had taken the lead in training health workers to help reduce the occurrence of malnutrition in the country.

Dr. Dat was speaking during the graduation of 14 nurses and health extension officers from WHPHA who had completed a week-long training course on Severe Acute Malnutrition at Hotel Kimininga in Mt Hagen recently.

The course was funded by UNICEF and conducted by two trainers from the National Department of Health, Dr. Michael Landi, a paediatrician and Ms. Helen Palik, a technical officer specialized in nutrition. They were assisted by Alexander Muwape, a Mt Hagen-based Volunteer Service Organization (VSO) nutritionist.

“Malnutrition has been over-looked for so long but as health workers we must do what we can with or without financial support. The little things we do can make a lot of difference in a malnourished person’s life and we can get satisfaction out of it”, he said.

The acting Chief Executive Officer of the WHPHA, Dr. Paulus Ripa who was invited to officially close the workshop said such training was very important and he was thankful to UNICEF for its continued support in funding such workshops.

He said whilst the training workshop was important, the WHPHA was unable to fund it as its operational budget for the year had been cut back by the Government due to the financial constraints faced by the country.

Dr. Ripa said there was nothing much the WHPHA could do about the financial situation faced by the country and urged the graduating staff to use the newly-acquired knowledge and skills to do whatever they could to help those in need.

“I am here to close this workshop as the acting CEO but as a paediatrician, my heart is with paediatrics and I am happy and thankful to UNICEF for funding it and to the National Department of Health for providing the trainers to teach our staff”, he said.

Sr. Wari Pune, speaking on behalf of the graduating staff said malnutrition was a big problem which had been over-looked for a long time and something needed to be done urgently to address it.

“We must use the knowledge we have gained and teach our other colleagues so that we can speak the same language and act together to save those suffering from malnutrition”, she said.

Sr. Pune also thanked UNICEF and the trainers for funding and imparting their knowledge and skills to the participants which she said were valuable tools which they would now use to help others.