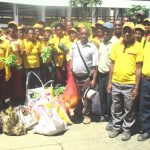 The church’s Hagen Central District which also includes churches in the Dei District of Western Highlands made the donation recently as part of its Adventist Community Service Program where it helps those in need.

The food items included kaukau, banana, taro, pineapple, pawpaw, pumpkin, cabbages and onion, carrots and other vegetables and were brought in by the members themselves through privately-organized transport.

The Director of the Church’s Hagen Central District, Pastor Leighton Kasimo said the donation of the food items was done for the service of God and was to show the members’ love for the sick patients.

Pastor Kasimo said the country was also facing a difficult financial situation and his group felt the hospital may also be experiencing the same situation and had decided to help.

He said the food items may not be enough to last a longer period but at least the church wanted to have a hand in helping to feed the patients.

“We see the value of our currency is low and we feel the hospital may have problems feeding its patients so this is why we have brought these kaukau and other vegetables to help you feed the patients”, Ps Kasimo said.

He said garden food was good because it had good nutrients that would make a person live a healthy and longer life and was particularly good for patients to eat and recover fast and go home.

He added that starting next year his group would donate garden produce to Mt Hagen Hospital on a quarterly basis to help feed its in-patients.

He said the National Government did not have the funds to adequately support public hospitals and other institutions in the country and their assistance was very much appreciated.

Mr. Anuma said the WHPHA had a difficult time trying to provide a balanced diet for its in-patients and such donations were most welcome and appealed to other interested groups to do the same.