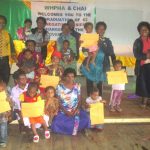 The Western Highlands Provincial HIV/AIDS Services has recently graduated more than 60 HIV-negative children, the biggest number ever to be released under its Prevention of Parents to Child Transmission (PPTCT) program.

The PPTCT program which has been running for the last six years provides continued care and treatment for people living with HIV/AIDS and has had a high success rate with more children born from HIV-positive parents testing negative to the disease.

The PPTCT program has been set up jointly by the Western Highlands Provincial Health Authority (WHPHA) and Clinton Health Access Initiative (CHAI), a partner in the delivery of health services in the province to provide continued care and treatment for those living with the virus.

When the mothers test positive to HIV during maternal and child health and antenatal clinics, they are put on anti-retroviral therapy programs starting from the first month of pregnancy to delivery to prevent the unborn babies from being infected with the virus,

Upon delivery the babies are then tested three times for HIV – first at six weeks old, then at 18 months and the last at 24 months old. The children released recently tested negative to all three tests, resulting in their release as normal healthy children.

The children tested negative after their parents had faithfully gone through the program, taking their medications on time. The occasion to discharge them was an emotional but a happy one for both parents and children who were issued with Certificates of Release.

Coordinator of the Western Highlands Provincial HIV/AIDS Services, Petrus Kombea urged parents living with the virus to look after themselves and their children well and take their medications faithfully in order to live a long and positive life.

He also thanked the parents for being faithful and participating fully in the two-year program which resulted in the release of the 63 happy children.

Staff of the antenatal clinic, labour ward and the Hilary HAART Clinic at Mt Hagen Hospital who have been directly involved in caring for and treating pregnant mothers infected with the HIV virus said they were happy for the continued support that they had received from the WHPHA and CHAI over the years.

They said through their support more children born from HIV-positive parents had been taken care of, resulting in them testing negative to the virus and urged the two organizations to continue their support in the years to come.