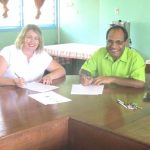 Health Authority a Leader in Health Service Delivery Through Partnerships

The Western Highlands Provincial Health Authority (WHPHA) is a leader in the provision of health services under the National Government’s public/private partnership policy, according to a Non-Government Organization.

The Vice Chairman of Susu Mamas Inc., Ms. Anna Maalsen said WHPHA was leading the way in how health outcomes were achieved and her organization was happy to be part of that achievement.

Ms. Maalsen made these comments in Mt Hagen recently when signing the second Memorandum of Agreement (MOA) between the WHPHA and Susu Mamas to extend the health services provided by the latter.

“Western Highlands Province is leading the way in how health outcomes are achieved and in partnership with NGOs like Susu Mamas, much can be achieved and we are proud to contribute to that achievement”, she said.

Susu Mamas currently operates the Kagamuga Urban Clinic under a three year agreement but this has now expired and a new seven-year agreement was recently.

The then Chief Executive Officer of WHPHA, Dr. James Kintwa said public/private partnerships in health service delivery were crucial to achieving better outcomes and he appreciated the good work that NGOs and FBOs did including churches.

He said NGOs and churches went to places where the government could not go, especially in the remote parts of the country, providing primary health care services to the bulk of the population and this was greatly appreciated.

“We recognize the partnerships we have between us and we appreciate this because NGOs have capacities that we don’t have and they provide about 60 percent of the primary health care services in the rural areas”, Dr. Kintwa said.

Dr. Kintwa also invited Susu Mamas to nominate an employee to attend the next six-month mid-wifery course to be conducted at Mt Hagen Hospital in the next month.

He said the up-skilling of community health workers in mid-wifery had resulted in good outcomes following the successful completion of the first three courses and more needed to be trained and based in the rural facilities so that no mother or child died during birth.