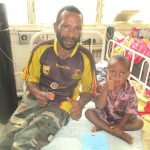 In-patients at Mt Hagen Hospital have had mixed feelings about their health during the beginning of April when doctors and nurses decided to stop work and attend to emergencies only.

While some seemed worried about what may happen to them if there was a mass resignation by the clinicians over their demands for improved services at the hospital, others had faith that the clinicians would not abandon them completely.

Most said nurses still worked in their respective wards despite what had happened and were confident that they would continue to look after and treat them.

Simon Kik, a diabetic patient from Togoba near Mt Hagen said doctors and nurses still visited him and other patients in the medical ward despite what had happened.

He said their presence made them happy and he hoped a workable solution would be reached so that they could continue to look after and treat them.

He said the only problem was that the toilets and showers in the ward were blocked at times and he hoped this problem would be attended to and rectified without delay.

Another patient, Jenny Hupa from Pangia in Southern Highlands is partially paralyzed and has been at the hospital for the last three weeks. She is only able to use about 75 percent of her body including her arms and legs.

She had been referred to Mt Hagen Hospital by the Kimbe Hospital in West New Britain for further treatment.

Mrs. Hupa said she was a simple villager and was worried that if the doctors and nurses resigned, she would have nowhere to go to and no money to buy medicine from pharmacies in town to continue her treatment.

She said she was happy to hear that the clinicians had decided to return to work while waiting for the report of the Investigation Committee to be completed.

Young Malakai Peter is four years old and comes from Bukapena village in the Mul/Baiyer District of Western Highlands Province.

He was admitted to the children’s ward two weeks ago suffering from asthma.

At his hospital bed, it was obvious that he was slowly recovering from the way he smiled and showed the “tops” sign with his thumb up.

However he and his father Peter were a bit worried that if the doctors and nurses did resign, there may be problems for him if he continued to stay.