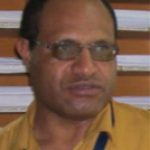 Kintwa Accepts Decision to Step Aside

The Chief Executive Officer of the Western Highlands Provincial Health Authority (WHPHA), Dr. James Kintwa has accepted the decision of the Board to step aside.

The Board, in a letter to Dr. Kintwa last Thursday, 12th May advised him to step aside following recommendations by the Minister for Health & HIV AIDS, Mr. Michael Malabag.

Mr. Malabag early last week said that the findings of the Investigations Committee he had established to look into the management and operations of the WHPHA following a petition by doctors and nurses last month had found no problems in the administration of the WHPHA however, has made a number of recommendations for the WHPHA Board to implement.

Dr. Kintwa acknowledges the view of the Minister that the Investigation has not found any serious breach in the administration but his decision is also to allow the Board to advertise the position and appoint an acting CEO while the selection process for a permanent CEO takes place as also recommended by the Health Minister.

Dr. Kintwa said his acceptance of the Board decision to step aside effective last Friday, 13th May was to allow for continuity of services at Mt Hagen Hospital for the sake of the patients and the public.

He said he had also accepted other recommendations by the Minister for the Board to act upon as a result of the findings of the Investigations Committee.

Dr. Kintwa said whilst he accepted the decision of the Board to step aside, he wanted the doctors and nurses to also take heed of the recommendations and continue to serve our people.

“For the sake of the patients and the health of the people of Western Highlands, I strongly call on the doctors, nurses and CHWs to continue to provide services to our people that we as professionals have pledged under oath to serve”, he said.

He said any continued disregard for the Minister’s directives by the doctors and nurses would only jeopardize the lives of the public.