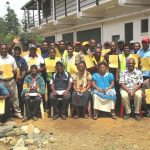 This follows its recent registration and licensing as a category C employer with the PNG Security Industry Authority,

The PNG Security Industry Authority was established under the Security Industry Protection Act 2004 to safeguard the industry and protect its members and their employees from unnecessary attacks by criminal elements and the public in general.

Any organization whether it be public or private that operates a security service must register with this Authority and be licensed under category A, B or C depending on its size and nature of its business.

Under the Security Industry Protection Act, all companies and organizations employing in excess of six guards are required to register themselves with the Authority and get a licence to operate. Their employees must also be trained to a high level and be issued with permits to work as guards to protect lives and properties.

The WHPHA has been operating a security service at Mt Hagen Hospital for more than 20 years to protect staff, patients and property from unruly behavior by the public as well as enemies and its recognition by the Authority is welcomed and appreciated.

Its licence to operate a security service was presented to its Director for Corporate Services, Ms. Julie Bengi who is in-charge of security by the WHPHA’s Security Operations Manager, Bill Nende on behalf of the Security Industry Authority during a ceremony at the hospital recently.

Ms. Bengi told the security guards that the occasion was an important one for them as it was to recognize them for their services as a good and strong team that always stood ready to protect staff and patients.

She said over a year ago the guards were issued with new uniforms and now they were being issued with permits, thus recognizing them for their potential input to this organization.

“The permits we are giving you is in fact our way of thanking you for the good job you do and also to empower you to get jobs elsewhere and be comparative in the security industry should you leave us”, she said.

A spokesperson for the security guards, Philip Miti said they were happy to receive the permits as this would enable them to seek jobs elsewhere should they leave the WHPHA and thanked the Management for recognizing and appreciating their work.