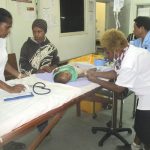 Mt Hagen Doctors and Nurses Agree to Return to Work

Doctors and nurses at Mt Hagen Hospital have agreed to end their plan for a mass resignation and return to work today, Friday 15th April 2016 following a meeting with a delegation from the National Department of Health (NDoH) yesterday.

The doctors and nurses said for the sake of patient care they would return to work today but demanded that the Investigation Team complete its findings and have the final report ready within 21 working days which starts next Monday, 18th April 2016.

They told the three-men delegation to advise the Health Minister, Hon. Michael Malabag to instruct the Investigation Team to have the report completed within 21 working days so that immediate action could be taken on its recommendations.

The team of senior executives was sent by the Health Secretary, Mr. Pascoe Kase yesterday to broker talks between the doctors and nurses and the Western Highlands Provincial Health Authority (WHPHA) Board and Management in a bid to end the impasse and allow all services, especially patient care at the hospital to return to normal for the sake of the general public.

The senior executives said they were happy for the decisions the doctors and nurses had made and asked them to return to work and take care of patients while they would take their demand back to the Secretary for Health who would then take it up with the Minister for Health, Hon. Michael Malabag.

Dr. James Naipao said the WHPHA was the best performing organization under the PHA Reform and it was sad that its name was now being tarnished as a result of what was happening.

He said the best thing for all parties to do was to go back to work and wait for the report of the Investigation Team to be completed and tabled before any action could be taken adding that resigning would not do anything good for the doctors and nurses or for the patients.

“You cannot resign – you must get back to work and wait for the report to be completed in 21 days as you have requested. No patient must die as a result of these issues”, Dr. Naipao said.

The doctors and nurses said they would return to work but would still hold onto their resignation letters and if the final report was not completed within the 21 days they would resort to other actions.