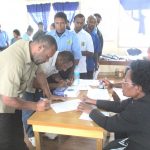 More employees of the Western Highlands Provincial Health Authority (WHPHA) have been inducted into the National Public Service, enabling them to know more about their roles and responsibilities as public servants.

The latest group to be inducted includes 68 employees who were issued with certificates recently after going through one week of induction. They have been serving the WHPHA for periods ranging from one to two years.

As the number of employees was big, they had to be divided into two groups and the trainers spent one week each with them. They said the participants had been faithful in their attendance and had committed themselves fully to the sessions that had been conducted.

“Through the induction we learnt a lot of things about the Public Service and the General Orders which we did not know much about before. We can now use this knowledge to help ourselves as well as those we serve”, a spokesperson for the participants, Francis Pena said.

The WHPHA’s Acting Director Curative Health Services, Dr. Madison Dat said the public perception about public servants was that they were lazy and not fully committed to their work and urged the staff to change their attitudes and prove these critics wrong.

“After going through this induction I am sure you all have learnt something worthwhile and I want you to start changing your attitudes and be somebody different that is ready to help those in need.

“You are now born into this big public service family and I want you to be positive and committed in your work and show the public you are not what they think you are”, he said.

Director Corporate Services. Ms. Julie Bengi congratulated the participants on behalf of the Board and Management and told them that their code of conduct and channel of communication were important elements for the success of themselves and the organization and that they must not overstep authority.

“When we sign our contracts of employment with our employer, we agree to be servants of the public and our duty starts there and then. Accountability and punctuality must be maintained at all times”, she said.

She said the difference now was that now that these employees knew the public service rules and regulations better, they would perform even better.

Ms. Bengi also told the participants that there must be gender equality and gender equity among all employees and respect for one another must prevail.

“Only when we respect each other will we see this organization go forward and produce good results for everyone to enjoy including our patients”, she said.

She said the WHPHA Board had declared 2016 as the “Year of Change through Positive Attitude and Affirmative Action” so everyone needed to change their attitudes towards each other for the good of this organization and the people they served.

Earlier, all employees signed their Public Service Oaths, promising to be servants of the public before Mt Hagen District Court Magistrate, Lorna Sani.