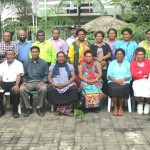 Initiated by the Western Highlands Provincial Health Authority (WHPHA), the Committee held its first meeting at Hotel Kimininga in mid-February after which the Task Force was launched.

The Committee comprises doctors and nurses from WHPHA, its service partners such as Susu Mamas, Clinton Health Access Initiative (CHAI), Anglicare, Marie Stopes and Church Health Services as well as Faith Based Organizations, Education and the Police Sexual Violence and Child Protection Unit.

The meeting was told that in PNG about 250,000 babies were born every year and only 36 percent of these were supervised deliveries. It was further told that the Family Planning coverage across the country ranged from 20-24 percent on average and this was not very good.

Western Highlands Provincial Health Authority’s Director for Curative Health Services, Dr. John Kiap said because of the many unsupervised deliveries, many mothers and young girls who fell pregnant died of infection and other complications and urgent action was needed to prevent such deaths from occurring.

A representative from Susu Mamas said that if a woman attended antenatal classes at Susu Mamas or one of the other service providers in Hagen Central, her probability of having a supervised delivery increased to 98%. This resulted in much better health outcomes for both mothers and their babies.

Dr. John Kiap said after seeing the aftermath of what was happening in the communities, it was decided such a Committee be formed to address maternal health issues.

“Our motto is “no mother or child should die during pregnancy, childbirth or post-partum period” and we must all live up to this”, he said.

The Committee is believed to be the first to be established outside of Port Moresby and will have its own Terms of Reference (TOR) but will be in line with the guidelines set by the National Maternal Health Task Force for provincial committees to follow.

It will hold quarterly meetings and make recommendations to the Senior Executive Management of the WHPHA, the National Maternal Health Task Force and the Western Highlands Provincial Government for appropriate action.