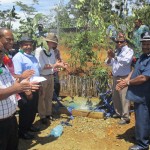 Tinsley District Hospital in the Baiyer River area of Western Highlands Province now has a regular water supply to cater for its needs.

The new water supply which took almost one year to construct was officially opened on January 22, 2016 by the new Australian High Commissioner to Papua New Guinea, His Excellency, Mr. Bruce Davies.

The water supply cost K800,000 to build and was jointly funded by the Member for Mul/Baiyer/Lumusa, Hon. Koi Trape, the Western Highlands Provincial Health Authority (WHPHA) and the Australian Department of Foreign Affairs and Trade (DFAT).

Mr. Trape contributed K250,000 from his electorate’s District Services Improvement Program funds while the WHPHA chipped in K150,000. This total amount (K400,000) was matched by DFAT which contributed K400,000 under its kina for kina aid policy.

The water comes from two streams up in the nearby mountains and has been piped over a ten kilometer route to the hospital.

The water project not only services the hospital but also the nearby Kumbareta High School, Dalapana and Kumbareta Primary Schools, the Baptist Union of PNG Head Office, the Tinsley College of Nursing and the five clans who live in the water catchment area and along the pipeline.

According to the Baptist Union’s Health and Rural Water Supply Project Manager, Mr. Joseph Lakai, the water has been connected to all areas within the hospital including staff houses and teachers’ houses and everyone including the local community was very happy for the clean water that they will have access to.

Prior to the construction of the water supply, the hospital had depended largely on rain water which had been collected and stored in a large Southern Cross tank and supplied to the various sections.