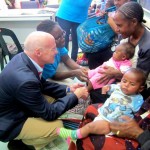 The United Nations International Children’s Emergency Fund (UNICEF) is ready to help organizations that produce good results in their respective fields, according to its Regional Director for East Asia Pacific, Mr. Daniel Toole.

Mr. Toole said children’s lives were most important and UNICEF was prepared to assist organizations that had good programs for children and produced good results.

The UNICEF executive said this in Mt Hagen recently while on a one day visit to the Western Highlands capital to see how programs and projects it funded were operating.

He spent about two hours with the Western Highlands Provincial Health Authority where he visited a number of the facilities that UNICEF had funded before being briefed on the operations of the organization by the acting Chief Executive Officer, Mr. David Vorst.

Mr. Vorst explained that the WHPHA had a strong focus on maternal and child health care and saw UNICEF as one of its important partners and was happy for all the help it provided.

He said the WHPHA had established good relations with private and Non-Government Organizations, churches and donor agencies including the Australian Department of Foreign Affairs and Trade and the Asian Development Bank and this had helped to deliver vital health services to the people of Western Highlands.

He added that under the Provincial Health Authority reform, Government, Churches and Non-Government Organizations all worked together with an integrated approach to health which worked well for health service delivery in the rural areas.

Mr. Vorst said more facilities were being built in the districts including aid posts, community health posts and district hospitals to bring services close to where the people were but staffing was a major problem.

The acting CEO said with these developments taking place, Western Highlands Province was leading in health service delivery and this was all because of a good Board and Management.

The UNICEF Regional Director, Mr. Daniel Toole before meeting with the management was taken on a guided tour of Mt Hagen Hospital to see some of the facilities that his organization had funded including the cold chain room at the MCH clinic, Hillary Clinic, Tininga Clinic and the Well Women’s Centre.

Mr. Toole said he was impressed with how the cold chain room had been kept and managed, adding that it was clean, tidy and looked fantastic, unlike other places that he had seen.

He said UNICEF had established good relations with the WHPHA just like other partners and it would continue to provide assistance.

“We have a good partnership with you and we will continue to help. If you want more cold chain, discuss your needs with the National Department of Health (NDoH) and we can supply them because there is a Memorandum of Agreement in place between NDoH and us”, he said.