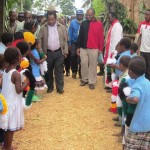 PHA Reform can Deliver Effective Health Services in the Country

The Provincial Health Authority (PHA) Reform can work and deliver effective health services if the right people are appointed to run them.

A senior executive of a Provincial Health Authority when brushing aside claims that the PHA reform is hard and cannot work effectively said if knowledgeable people were appointed to the PHA Boards and Management, good results can be achieved.

The Chief Executive Officer of the Western Highlands Provincial Health Authority, Dr. James Kintwa said experience has shown that with a good Board and Management team supported by a Government that has the political will to drive the reform, nothing can go wrong.

Dr. Kintwa who is the CEO of one of the first three provinces to trial the PHA reform made these comments when speaking at the official opening of a Community Health Post (CHP) at Tipuka village outside Mt Hagen recently.

“There is nothing wrong with the establishment of the PHA Reform. If you have the right people on the Board and Management, it will work well and produce results”, he said.

Dr. Kintwa told the Member for Hagen Open and Minister for Transport and Infrastructure, Hon William Duma who was present to officially open the CHP that the PHA reform was working in Western Highlands and that it can work in other provinces.

“I want to believe that PHA can deliver services and I am happy for the support you and the other Members of Parliament from the province including Governor, Rt. Hon Paias Wingti give us to deliver vital health services to our people”, he said.

He also said that the establishment of Community Health Posts was another reform established by the Government and Western Highlands was the first province to implement it. It has so far built and is operating six CHPs since 2013 with some more currently under construction and more being planned to cover all parts of the province.

Dr. Kintwa said both reforms were working well in Western Highlands because there was political will from both the National and Provincial Governments and he urged both Governments to continue to support the reforms for a healthy population.

He said under the reforms, Mt Hagen Hospital would become a regional referral hospital for the Highlands region and the WHPHA was embarking on building more district hospitals, health centres and CHPs to serve the people of Western Highlands.

On the redevelopment of Mt Hagen Hospital into a regional referral hospital for the Highlands region, Dr. Kintwa said he was happy to lead the team which is ready to start construction in October this year but he needed the necessary funds from the National Government and urged Mr. Duma and Prime Minister, Hon Peter O’Neill to make those funds available without delay.

Mr. Duma said District hospitals and Community Health Posts were essential for bringing health services close to the people and the National Government supported it.

He said the Government had trust and confidence in Dr. Kintwa to implement the reforms and redevelop Mt Hagen Hospital but the problem was that the funds committed for the redevelopment could not be released quickly as the Government had spent most of the funds on the coming South Pacific Games.

Mr. Duma said when the price of oil goes up and the economy improves, funds committed for various projects including the hospital redevelopment would be made available.

He said Dr. Kintwa was one of the best performing CEOs in the country as acknowledged by both past and present Health Ministers and he was confident Cabinet would approve funding for the redevelopment as soon as funds became available.