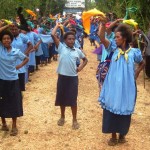 The people of Tipuka village and the surrounding community in the Ogelbeng area of Hagen Central District will soon receive primary health care services at their doorstep.

This follows the opening of a new Community Health Post (CHP) in the area recently by the Member for Hagen Open and Minister for Transport & Infrastructure, Hon William Duma MP.

Known as the Tipuka Pung Kunjil Memorial Community Health Post, the health facility has been named in honour of a senior nursing officer from the area, the late Pung Kunjil who died two years ago while serving at Mt Hagen Hospital.

This is a fulfillment of a commitment by the Western Highlands Provincial Health Authority (WHPHA) to build a CHP in late Pung Kunjil’s name to replace an old aid post in the area as part of the project to reopen closed aid posts using funding from the Public Investment Project (PIP).

The commitment which was announced during the funeral service of late Pung followed an earlier decision by the WHPHA to build a CHP there as well as six others throughout Western Highlands and Jiwaka Provinces.

The newly constructed CHP which has a clinical building and a staff house cost more than K200,000 to build and will be staffed and equipped for use within the next two weeks.

It will be staffed by a nursing officer and two community health workers and will have services such as an out-patients department, a minor procedure room, a birthing place and an overnight ward and conduct health promotion activities in surrounding villages as part of the CHP roles.

The facility was jointly funded by PIP, the Western Highlands Provincial Health Authority and Hon William Duma through a local association, the Kekewati Community Development Association.

The Minister had given K1 million to the association to facilitate various social and economic projects in the area and executives of the association had made available K100,000 towards the construction of the health facility.

Many of the leaders who spoke at the opening thanked the Western Highlands Provincial Health Authority for selecting Tipuka among others to have a CHP built, saying they were happy for the decision as it would bring health services close to their doorstep.

They also thanked their Member and Minister for Transport and Infrastructure, Hon William Duma MP for the financial support for the CHP, adding that without such assistance, the opening of the facility would not have been possible.