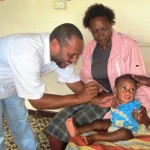 An Interplast team which visited Mt Hagen Hospital earlier last month has done great wonders for disabled people in the Western Highlands and the Highlands region.

The Australia & New Zealand Interplast team which returned on its annual visit has put smiles on many faces, especially young children who were disabled as a result of congenital or acquired medical conditions.

The team of seven doctors and nurses including two national doctors was in Mt Hagen to repair bodies and rebuild the lives of many people who would otherwise have had no hope of having their deformities corrected.

The team conducted clinics on the first day of its arrival and continued the next day until after lunch when the first patients were taken into the operating theatre to have their deformities corrected free of charge. More than 100 patients including some that had been referred from other Highlands hospitals were reviewed by the team.

More than 20 patients, most of them young children had been operated on for various defects including burn contractures and congenital abnormalities such as harelip and cleft palates.

Members of the Interplast team are volunteers who provide free medical treatment to people living with a disability as a result of a congenital or acquired condition.

They would normally visit Mt Hagen at the end of each year to provide this vital service but because they could not make themselves available last year, they had decided to visit early this year.

The Western Highlands Provincial Health Authority’s acting Deputy Director Medical Services, Dr. Timmy Tingnee thanked the team for spending its own time and resources to travel to Mt Hagen and provide such a vital service free of charge.

“We are privileged to have such a team come and do all these operations free of charge”, he said.